Black ink and red and blue pencil on a Gallery Le Point Cardinal invitation card for a Vasarely exhibition in June 1962.

“André Breton’s sentence about the drawings 62 and 63: "The heart of Benjamin Péret is to the carreau du Temple* (carreau = diamonds) what the pike (pique = spades) spitting Princess of Lamballe’s head is to the crimson clover (trèfle = club)" has been used as a preface to Benjamin Péret’s Big Game [published in 1928].” Jean-Michel Goutier, Octavio Paz (preface by), Jean-Michel Goutier (selection of texts and catalogue by): André Breton, Je vois, j'imagine, Paris, Gallimard, 1991, p. 176).

*Note to reader: the "Carreau du temple" is a covered marketplace in the 3rd arrondissement in Paris, built in 1863. It is located in the place of an ancient marketplace, at the entryway to the the fortress of the Knights Templar (l'Enclos du Temple), dating back to Medieval times. [André Breton website, 2019]

“What is the Game? It’s painting, writing, it’s making poetry. When you are alone, at your table to write, you begin to play with yourself.” Jacques Hérold (in “Alain Jouffroy, Les jeux surréalistes (entretien avec Jacques Hérold)”, in: XXe siècle, Le surréalisme I, nouvelle série, XXXVI année, n° 42, June 1974, p. 151).

“As I noted on the occasion of one of the first International Exhibitions of Surrealism in 1935 in Copenhagen, "Painting, until recent years has sought to express the manifest relations existing between external perception and the Ego. The expression of this relation has proved to be ever less satisfying, ever more elusive." While seeking to convey the structures of the material world, it has ended up favoring some over others. Meanwhile, the evolution of mechanical forms of figuration have been reduced to nil. In these circumstances, the surrealists have considered that "or an artist there remains but one field to explore, i.e. the field of pure mental representation, which lies beyond the field of real perception."The important thing - I added then - is that, as Freud has said, "sensations in relation to the processes of mental representation take place in various—and at times the most profound—levels of the psychic apparatus." In Art, the quest for such sensation works toward the abolition of the Ego in the Self...

“Within Surrealism, by definition, the artist enjoys a total liberty of inspiration and technique... What thoroughly qualifies the surrealist work, whatever the aspect it might represent, is the intention and the will to refuse the authority of the physical world (which for so long has tyrannized Art, deceiving Man by its appearances) to reach the field of total psychophysics (of which the field of consciousness is but a lesser part). The unity of surrealist conception, considered as the criterion, cannot be found through the "ways" already chosen, which differ radically from any other precedent. Rather, the unity resides in a profound sense of purpose in community: to discover the land of desire together, so that everything, in our time, conspires to ignore and explore it in every way, until such efforts reveal the secret to “Changing Life.” (André Breton, Sarrebruck, Mission diplomatique française en Sarre, Peinture surréaliste en Europe (preface by André Breton), 1952, pp. 5-6). 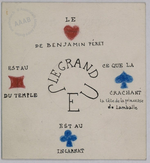 Drawing in black ink and pencil on yellow paper with a sentence by André Breton quoted by Benjamin Péret.