The papers assembled together in this file relate to what one can call “The Affair of the 121.”

It is first a letter from Breton to the ministry of justice, dated from the 22nd of September, 1960. Having learned that a few signatories of the famous manifesto were charged with rebellion, he asks to be charged as well, in a gesture of solidarity, which is the quintessential weapon of the intellectual (such as Zola asked publicly in J’accuse to be found guilty for having access to the file of the Dreyfus affair).

In 1960, it was important to plot against the government, to force it to bend, instead of taking the risk to have a large part of the intelligentsia found guilty. Another aspect of this affair, more discreet, was sent to us by way of a letter dated from the 18th of September (of which a few sentences were copied from that of the 22nd): summoned to appear as a witness in the case of a "defector," Breton refuses to present himself at the convocation, all the while supporting the position of this unknown person.

Handwritten texts signed, Paris, the 18th and 22nd of September, 1960:
– Handwritten letter dated and signed in ink by André Breton to “the Presidents/Chairmen and Judges,” relative to the request of appearance as a witness to the Paris Tribunal of the Armed Forces.

“I knew from word of mouth, from those who attended the hearing yesterday, and I saw it confirmed in the press this morning, according to the government commissioner, that to cite the signatory witnesses of The Declaration on the Right to Defect in the War of Algeria would be an offense for the Tribunal. Being one of these signatories, I am standing in full solidarity of the 120 others.”

The handwritten letter dated and signed in ink by André Breton to the Honorable Judge.

“I am standing, therefore as one of these co-authors, and I specify that in signing, I am implicitly committing myself to do everything in my power to assure dissemination." 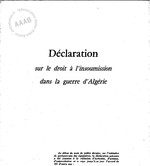